News Flash--DBR is Closed For These Dates

Sorry, but the Bunkhouse is unavailable the following dates:
July 30-August 9 and the weekends of October 8 and October 15. I expect to be closed on days on either side of the 15th.
Otherwise, the the calendar is wide open. Come and enjoy The Dancing Bean Ranch, just not on the above dates.
Posted by Dancing Bean Ranch at 9:30 AM No comments:

What Is That Lady Doing With That Troll?

What AM I doing with that troll? Or what's it doing with me? Nothing, really, except helping me enjoy a vacation to Disney World with my daughters.
Disney World isn't in my budget this year, and maybe not in yours, either. Plus, I'm in the grasp of summer doldrums. Maybe you are, as well.
The writing is going slowly (and I'm still debating why someone killed the victim in the next story) and maybe your work is, too.
So to make your escape easier, I'm lowering my summer weekend single night price to $65, double occupancy and reducing Friday, Saturday stays to $120. And just for fun, I'll leave a special welcoming gift for you--a slice of pie so homemade that even the peaches came from the Dancing Bean's orchard.
I can't offer trolls, by the way, nor pixies nor elves nor even gnomes. But husband Bill (sadly, dead in the first book but happily alive in real life) is an expert on all things Norwegian. Or you can just enjoy our 20x30 foot in ground swimming pool. Personally, my advice is to take the latter.
Posted by Dancing Bean Ranch at 9:10 AM No comments:

So far, my favorite tidbit about the Russian spy ring is the following, as reported on NPR, "The Guardian" and several other sources:
Upon learning the truth about the nice couple next door, a neighbor said, "They couldn't have been spies. Look what she did with the hydrangeas."
My favorite line from Agatha Christie is very similar. Miss Marple is a guest at a country house where, as luck would have it, there's a murder. After a few days' careful observation, she reveals the name of the murderer to the hostess, who replies, But she has the best herbaceous border in the county!
It's no secret that I'm a big fan of murder mysteries and, indeed, am writing one of my own. No, I'm not published (I hope I'm justified in adding yet), but some of my best friends are.
When you settle into your room, you're likely to notice a couple of books, for loan or resale. One is a true crime story by Laura James. Besides the quality of the writing, what's truly fun about The Love Pirate and the Bandit's Son is that much of the real life action happened in and around Sapulpa, Oklahoma, just east of the DBR.
The other books are from the new Medieval Noir series by Jeri Westerson. A devotee of medieval history, Jeri set out to bend the rules about what a historical novel set in the period could be. And her sleuth, a disgraced knight named Crispin Guest, bends them, indeed. As one reviewer put it, Crispin is "more Sam Spade than Brother Cadfael."
I hope to have Jeri on soon as a guest blogger, comparing the lawlessness of Oklahoma Territory and the Middle Ages. Trust me, there are comparisons. Besides, here at the 'Bean, we've been known to bend a few rules of our own.
Posted by Dancing Bean Ranch at 7:07 PM No comments: 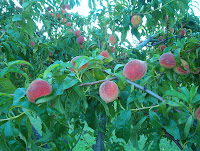 Fresh peach pie.
Pastry for double crust pie.
Mix 4-5 cups sliced peaches, 3/4 c. sugar (less, if your peaches are as sweet as mine), 3 T tapioca. Dot with 2 T butter. Vent upper crust. The tapioca keeps the juice nice and clear, rather than clouded as flour would
.
Bake 40-50 minutes in upper third of 425 oven. Before baking, I like to embellish with a few sprinkles of sugar and a little freshly grated nutmeg.
BTW--The DBR provides seasonal treats for guests, such as the above, in addition to breakfast items. I picked peaches this morning and tonight the pie is cooling in the kitchen. Doesn't it make you wish you were here to enjoy it?
Posted by Dancing Bean Ranch at 6:56 PM 1 comment: 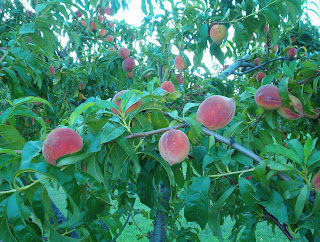 Can you name anything sweeter than the first peach of the year, eaten right there in the orchard fresh off the tree, with warm, sticky juice dripping down your chin? I didn't think so--I can't, either.
Peach harvest has begun on the Dancing Bean Ranch. Though our orchard is small, our peaches ripen in succession so for the next few weeks expect fresh peaches on your breakfast tray.
Posted by Dancing Bean Ranch at 2:42 PM 1 comment: 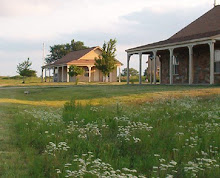